Our mission continues in the spirit of James J. Peters and his tireless work to help America’s veterans.

VetsFirst is a program of United Spinal Association that assists veterans and their eligible family members in obtaining the benefits they are entitled to, deserve and need.

Our Mission
VetsFirst leads the way in advocating for veterans living with disabilities and ensuring they achieve the highest level of independence and quality of life.

About VetsFirst
For 75 years, with the support of our growing community, United Spinal’s VetsFirst program has dedicated itself to building an inclusive world that empowers injured and paralyzed veterans to reach their full potential. Throughout our history, we have provided veterans valuable programs and services that maximize independence, enable successful community living, and provide opportunities to become leaders, advocates, and innovators.

VetsFirst’s leadership and staff has empowered advocates as we enhance disability rights, provide the community with accessible design information, provide healthcare resource information, as
well as counseling, peer support and other assistance to facilitate community reintegration. If there is one fundamental truth we have learned over the years, it’s that we are united in our belief that all of society wins when honorable veterans with disabilities have equal opportunities to pursue their dreams and interests

VetsFirst advocates nationally for all generations of veterans, including individuals living with post-traumatic stress disorder and traumatic brain injuries. 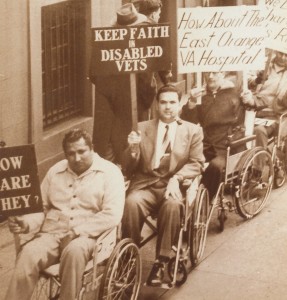 Our advocacy efforts go far beyond offering words of support and encouragement. We take this fight to Capitol Hill to bring attention to issues that matter most to the men and women who proudly served our country.

We connect with thousands of veterans and active military servicemen and women annually through our call center and online help desk, Ask VetsFirst. Our staff takes the time to address each inquiry, offering guidance with questions on military separation, claims appeals, and state benefits.

In addition to providing individual support and counseling services, VetsFirst offers timely and news and information across the spectrum of issues presently impacting the veterans community, including state benefits, separating from the military, as well as exclusive feature stories on military health care and VA funding and compensation.

Our History
As a program of United Spinal Association, VetsFirst has a long and illustrious history assisting and representing veterans and their eligible family members. Unlike other organizations, United Spinal—a VA recognized veterans service organization—strives to ensure the organization remains an instrument for veterans rather than an institution.

United Spinal’s history began in 1946 when a group of paralyzed World War II veterans from New York City and the surrounding area banded together to raise awareness of the alarming plight of their fellow paralyzed veterans. Rejecting the poor treatment they received at their local VA hospitals, they led the charge for greater civil rights and independence, forming the congressionally chartered Paralyzed Veterans of America (PVA). United Spinal, formerly known as Eastern Paralyzed Veterans of America (EPVA), was a chapter of PVA.

As the organization matured under the leadership of James J. Peters in the 1970s, 1980s and 1990s, United Spinal helped improve the quality of health care for veterans, backing words with deeds and dollars by winning denied benefits for individual vets and investing money in VA programs and infrastructure. These efforts have been a boon to every American with a disability.

In 1970, Peters convinced Life magazine to run a cover story exposing the deplorable conditions facing Vietnam veterans with spinal cord injuries at the Bronx VA Medical Center. The story sparked a national outrage and convinced Congress to raze the facility and build a brand new hospital with special attention to SCI. In 2005, the hospital was renamed in honor of Peters and his work to ensure all veterans receive quality health care.

Today, VetsFirst continues the important work to uphold the values, objectives and mission needed for our nation’s veterans no matter when or where they served.