What Veterans Day Means to Me 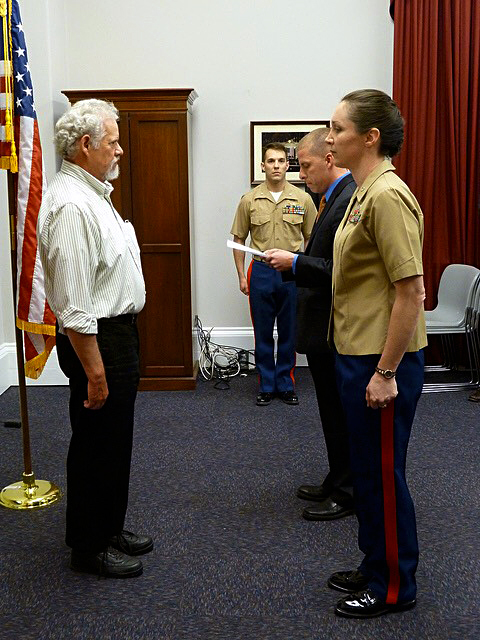 When I was a Marine Congressional Fellow in 2010, I had it arranged that my father Blair Meglathery officially receive his Marine Corps Good Conduct Medal. It had been noted in his record book in 1964 when he earned it, but it had never been presented.

It is that time of year again where the leaves turn, the air gets crisper and, most importantly, I watch my Philadelphia Eagles stay consistent and disappoint me for yet another season. But, it also means that Veterans Day will shortly be upon us.

As such, I wanted to take the opportunity to say happy Veterans Day to our fellow VetsFirst veterans and to express what the holiday means to me. I would also like to encourage our members to send in their comments as to what it means to them. I would love to post those on our website.

What Veterans Day Means To Me

Deborah from PA writes:
“Veterans Day stands for “the home of the Free and the Brave” for “Freedom isn’t Free” so “Every son of Liberty, Send the word that the Yanks are coming and we won’t come back till it’s over, over there” for we are the United States of America defenders of the “Free World”, even if the World forgets to say Thank You. So start the parades, wave “Old Glory”, and let every soldier know that the USA stands proud, tall and free because of their service, devotion and bravery. On Veterans Day I express the proud remembrance of 32 family members serving in all four military branches of service including one Navy cousin who died at Pearl Harbor. Thank you to my family members who served, every Veteran and current Service Member who has protected and kept me and the world free. God bless our Veterans and Service Members!”

Christine from PA writes:
“Veteran’s Day to me is a time to laugh, cry, and remember all of us who have served. It is one of the most significant and memorable days of the year.

At one point, I had the most important job in the country; defending this Nation. Now I have another very important job; defending our veterans and their eligible family members before the Department of Veterans Affairs (VA) in obtaining the rightful benefits they are entitled to, deserve and need.

As one veteran to another, I salute you all for your experiences and sacrifices to this great country we live in. We are the courageous men and women who fought and died for liberty and freedom for all.

May God bless and keep all those who have served and shall serve in the future.”

Ziggi from NY writes:
“Veterans Day is a very personal and important day for my family. Both of my parents are from Poland. They survived the holocaust only to find themselves under the intolerable rule of communist Russia.

They left Poland illegally and found their way to the American sector of occupied Germany where they were placed in a displaced persons camp run by the American military.

The stories they told of those times resonated with references to the sincere kindness, the respect, and the humane treatment they received from the GI’s stationed at that camp. It was made clear to me that our family owed a great deal to both serving Americans and those who have served, regardless of where or when.

For me, Veterans Day is an opportunity to thank all of our Veterans for the survival of my family.

Thanks Vets, you’re the greatest!”

While the number of those that serve continues to shrink, it is important to note the important role veterans play and to acknowledge that their influence on public policy is often greater than the sum of their parts. After all, United Spinal Association, and by default, VetsFirst, have their roots in the action of returning World War II veterans who fought for their rights and in the process helped all Americans with disabilities

As you can imagine, Veterans Day has deep meaning for me. Many of you already know I am a Marine veteran of the war in Iraq. So my connection to veterans is directly related to my service. However, Veterans Day means more to me than a reflection on my colleagues with whom I served in the Anbar and Babil provinces.

Veterans Day is a day in which all veterans can see their link to the past. As a Marine veteran, I can trace my “bloodline” to the drinking men of Tun tavern who served in the rigging of wooden ships and landed in New Providence. It means, in a weird way, my father is my brother, since he was (and most definitely still is) a Marine. It means I am the brother of the men at Belleau Wood where in 1918 more Marines died in that battle than in the entire of history of the Corps up to that point. It means that I am brothers with the docent at the National Museum of the Marine Corps who as a 19 year old landed at Iwo Jima on D Day +1; a battle in which we lost more Marines than at Belleau Wood.

More and more as our military integrates itself, I find that soldiers, sailors, airmen and coast guardsmen are my siblings as well. I served with the US Army’s 3rd Infantry Division in Anbar province. Their division was named “the Rock of the Marne” for being steadfast at the second battle of the Marne. I proudly wore their patch on my body armor. They are my siblings and so are their forefathers.

Veterans are a tie to our history as a nation, for if it were not for their action and sacrifice, we might not have achieved our independence, slavery may have been extended for years, Europe might be dominated by National Socialism or Communism. Beyond that, veterans are our tie to the future. The young veterans now will be the ones who lead our nation in the years to come.

As a child, I did not cry watching Bambi or Old Yeller. But if you play the Marines’ Hymn or the Battle Hymn of the Republic, well, I swear dust gets caught in my eye. I get misty eyed because at the first notes of the music, I instantly reflect on the past and think of the sacrifices made by others for me. Were it not for veterans, I would not have the life my family and I enjoy. I honor our veterans and I thank them for making this country what it is and thank them because their efforts have benefited every American.

To our Veterans at VetsFirst and United Spinal Association, you have my sincere respect, admiration and affection.